A Case Of Poor Project Management

When PropertECO was contacted by a homeowner suspecting they had rot, our surveyor went along armed with his camera & ready to report back. 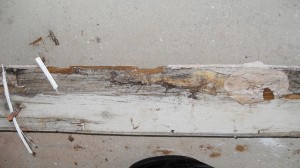 The skirting boards had been affected by wet rot

The ten-year-old property was indeed suffering from wet rot, which had attacked the timber door linings and skirting boards. Wet rot requires a high level of moisture within the timber, so our surveyor removed the skirting boards to have a closer look and identify the root cause of the problem. 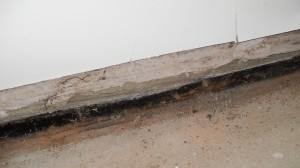 He was instantly able to see that the problem lay with the way in which the original damp proof course had been installed; the contractor had failed to connect the floor membrane into the DPC. This resulted in high levels of moisture being present at the base of the walls behind the unprotected skirting boards, which inevitably led to an outbreak of wet rot.

Fortunately, the problem was spotted relatively early by the homeowner and will not be overly difficult or expensive to rectify, however it could have been much worse if left undiscovered for any longer.

The moral of this story is to ensure that any work is properly supervised by a project manager who will make certain that correct methods and specifications are followed. Had the construction of this property been overseen in this way in the first instance, the membrane would have been correctly installed and wet rot would not have occurred.

It pays to get things right first time, and we offer a comprehensive project management service to look after all of the details so you don’t have to. Get in touch with us today to discuss your scheme so you can be confident you won’t have any nasty suprises down the line.