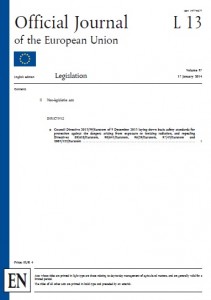 A new directive to safeguard people against the effects of radiation, including radon, has been introduced by the European Union.
The Basic Safety Standards (2013/59/EURATOM) were published in the official Journal of the European Union in January and “lay down basic safety standards for protection against the dangers arising from exposure to ionising radiation”.

The directive requires all member states to put plans into action so that the required standards are achieved by February 2018. Several of the requirements, such as the setting of national ‘action levels’ and publication of building regulations to protect new buildings from radon already exist in the UK, however the main changes that are likely to be seen in this country are an increase in enforcement (e.g. of workplace radon testing) and an increase in awareness-raising activity.

Each member state is required to create a ‘national action plan’ for dealing with radon. Below are a number of considerations included in the directive that should be taken into account in the plan:

The final point relating to consideration of other issues such as energy saving measures has recently been addressed by research published in the British Medical Journal (BMJ). A modelling study demonstrated that the introduction of energy-saving measures such as increased insulation and air-tightness would lead to the average radon concentration in UK homes increasing by more than 50%. In turn, this could result in an additional 278 lung cancer deaths each year, highlighting the need for a balanced approach between achieving improved environmental performance without increasing risk to human health.